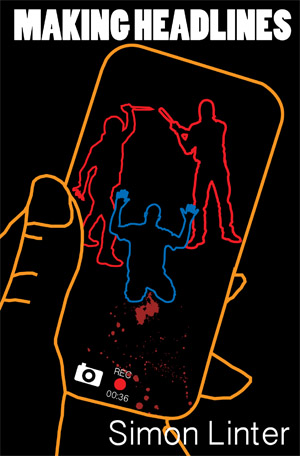 When I studied Media in the 1990s, part of the course included writing scripts for potential television shows. I liked this format so much that I started writing a script based on an idea I had. When I had finished it (in 1994), it was roughly 90 pages long, called Stealth, and in all honesty wasn’t very good. I didn’t know what to do with it so I shelved it away until 1998 when I rewrote the script and updated it. I sent it out to several film producers and got a reply from two based in the US, one of which I later met in The Groucho Club in London. This meeting did not lead to anything other than a trip to London and meeting a happy-go-lucky film producer, and this also meant that I still had a manuscript that I didn’t know what to do with. In 2013 I signed up for a course on creative writing at Folkuniversitetet in Stockholm and dredged up my script called Stealth but renamed it Making Headlines. I started to write a few chapters and other participants on the course wanted to know what happened next, which forced me into writing the first draft in novel format. After this, I then wrote draft 2 and sent it off to an editor who came back with suggestions. I then wrote draft 3, which is the final version that I released. So all in all I wrote 5 drafts of Making Headlines and it was released in 2015, 20 years after I had first attempted to write it as a film screenplay.